An Overview of the Technical and Regulatory Challenges

Introduction
The United States has set a goal of developing 30 GW of offshore wind by the end of the decade. To achieve this, the Bureau of Ocean Energy Management’s (BOEM) will be leasing regions in all coastal regions of the United States including the Atlantic coastline, Pacific coastline, and Gulf of Mexico. While most offshore wind developments will be dedicated to grid electricity production, there is increasing interest in hydrogen production through electrolysis, particularly in the Gulf of Mexico which has existing infrastructure to support the industry.

Offshore wind hydrogen production facilities must produce hydrogen in a cost-effect manner while also considering safety, protection of the environment, prevention of waste, and conservation of natural resources. The experience gained from oil and gas development will provide the industry with a solid foundation, but new capabilities, approaches, and processes will be required to ensure the safe installation and operation of the latest energy resources. This white paper introduces many of the considerations needed for safe and cost-effective hydrogen production from offshore wind.

Producing Hydrogen Offshore
Significant advances in wind energy technology has led to wind turbines of increasing capacity in search of consistent wind resources. This has resulted in a significant increase in offshore wind farms globally and led to numerous developers pursuing wind farm development on the United States. At the same time, the role of electricity generated by wind turbines is being revisited, from a direct input into the US electrical grid, to the mechanism for hydrogen generation through electrolysis. The offshore environment is ideal for this method of hydrogen production considering the abundance of water. Figure 1 is a schematic showing an overview of producing green hydrogen via offshore wind and electrolysis. The term ‘green’ hydrogen simply means hydrogen produced using clean energy.

The basic concept behind green hydrogen production involves using electricity generated by renewable energy sources (e.g., offshore wind turbines) to separate hydrogen from water via electrolysis. Hydrogen is a desirable output of this process as it is a clean burning fuel and can be stored for long periods of time. There are multiple methods operators could choose to execute this process, many of which are already being considered at a conceptual level.

Hydrogen Specifics
Before the methodologies for hydrogen generate/production, storage, and transmission are discussed, it is important to provide background on characteristics of hydrogen that make it uniquely challenging. Natural gas will be used for comparison purposes as it is a gas well understood in offshore production, handling, and storage. Table 1 below lists several parameters and their associated values for hydrogen and methane (the primary component of natural gas). 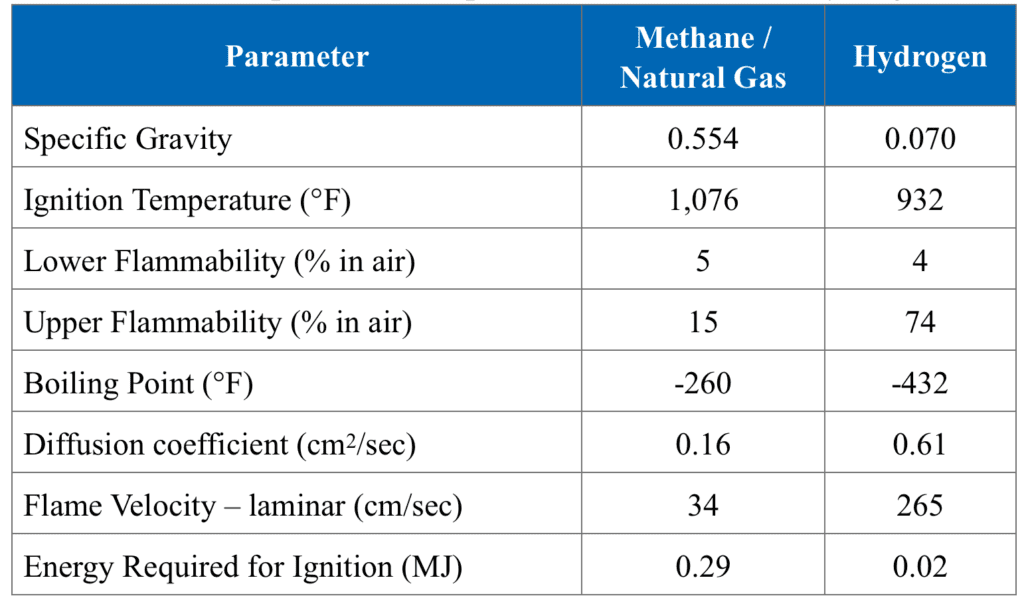 Comparison of Properties for Methane and Hydrogen

The information contained in Table 1 highlights many reasons why hydrogen presents unique challenges to handling and storage. Like natural gas, it is colorless, odorless, tasteless, and non-toxic. Detection of hydrogen is challenging as it is highly diffusive, and odorants are not easily added. Because of its small size and weight, it produces higher leakage rates than many common gases and can permeate through both metal and non-metallic materials. Hydrogen is also extremely flammable and creates a very high explosion risk when allowed to mix with air. The lower flammability limit of 4% means that a hydrogen leak in a confined space could quickly reach a flammable condition. As shown in Table 1, the energy required for ignition is about 1/10th of that required for natural gas. In addition to this, a hydrogen flame is nearly invisible in daylight and produces little radiant heat. This means that a hydrogen flame would not be sensed until it is extremely close.

In addition to safety challenges presented by hydrogen, it is also known to have detrimental effects on the materials used in transportation and storage due to the potential for embrittlement under certain conditions. This phenomenon can lower material toughness, which in turn reduces critical flaw size and potentially increases required inspection intervals.

Conceptual Approaches to Production, Storage, and Transportation
Conceptually, there are many potential configurations for production, storage, and transportation of hydrogen produced using offshore wind. Figure 2 of the U.S. Dept. of Energy Hydrogen Program Plan (https://www.hydrogen.energy.gov/pdfs/hydrogen-program-plan-2020.pdf) provides a good summary of the various technology options that may be considered. This section focuses specifically on hydrogen produced with offshore wind. One example involves producing electricity using offshore wind and sending it onshore for electrolysis. This process could be completely isolated from the electrical grid or only some of the electricity could be used for onshore hydrogen production. This method would not require any additional requirements beyond those for offshore wind farm development. Other methods involve performing electrolysis offshore and transporting the hydrogen back to shore. Right of way and installation requirements will vary depending on the methodologies used. The conceptual examples outlined below are intended to demonstrate the variety of possibilities associated with offshore hydrogen production using offshore wind and the breadth of knowledge that would be needed for an overseeing regulatory body.

Concepts that may be considered for producing hydrogen include:

Concepts that may be considered for storing hydrogen include:

Concepts that may be considered for transporting hydrogen include:

Challenges Introduced due to Conceptual Approaches
The previous section outlined some of the numerous concepts that operators may consider for green hydrogen production offshore. These concepts introduce new challenges that should be taken into consideration. A few examples are provided below.

Some new considerations introduced by producing hydrogen with offshore wind include:

Some new considerations introduced by storing hydrogen offshore include:

Some new considerations introduced by transporting hydrogen offshore include:

The items above account for only a small portion of the questions operators and regulators of offshore hydrogen generation should consider. Importantly, other technological advances have provided example frameworks for filling knowledge gaps through empirical and analytical research and industry collaboration. The use of joint industry projects and dedicated research efforts should be used to advance collective knowledge of the regulatory body.

Moving the Industry Forward
With 50 years of experience in energy, SES Renewables is an ideal party to perform research and conduct JIPs that identify and address the knowledge gaps in the green hydrogen industry. The topics listed below are examples of potential gaps that could be addressed.

Closing the knowledge gaps will require collaboration between industry stakeholders, regulators, and other public and private entities. This white paper provides a general overview of the requirements needed, as well as targeted initiatives that should be undertaken as we embark on this next wave of offshore energy development. Contact SES Renewables to discuss your green hydrogen project or technology.